Recently, the every-day life of a large part of the world’s population has been disrupted by the outbreak of the Corona-virus pandemic. Its strong virulence has rapidly led to an exponential increase in the number of infections, forcing a radical change in lifestyle and putting social order into crisis. This crisis is particularly felt in Western democracies for two main reasons: the advanced age of the population and the need for balance between the health security and the citizens’ civil rights. The establishment in many countries has undergone a huge stress test in an attempt to reconcile different primary needs (for example, the right to health, freedom of movement, and economic well-being) without having certain information and in a context of extreme urgency.

In this context, effective communication is fundamental to gain the trust of citizens. Indeed, many have noted that Merkel’s communication is unique compared to other countries’ leaders. While many have often held speeches with strong emotional impact, referencing to a hypothetical war against the virus, the German leader has opted for a more sober and rational style.

The following section will focus in detail on the communicative style adopted by Angela Merkel in this situation by analyzing three of her speeches since the advent of the Corona-virus. The first one is the one she gave to the Nation of March 18th (the first message to the Nation since she is a Chancellor, excluding New Years Eve’s). The second is a speech held in Parliament on April 3rd and the third is the press conference on April 15th. Additionally, these speeches will be compared with a large corpus of more than 200 Merkel’s speeches help in a different context during all the years she was the Chancellor (2006-2019). The main contexts in which speeches are sampled are New Year Eve speeches (a real neutral occasion), speeches held in front of the Bundestag (more technical and addressed to a more acknowledged audience), more generic public speech during the particular occasion, and speeches held in front of the CDU voters and politicians (more homogeneous audience). Comparing Corona time speeches with other speeches across the years and across different contexts can help to establish whether there is some element that is significantly different from the rest of the sample.

The last election rounds of the main democracies have shown how fundamental political
communication is to gain the trust of the electorate. In this context, it is not only the content that counts but also the form plays an essential role. The choice of specific words can say much more than their substantial content. The way words are chosen is not random, and reflects one’s inclinations and character traits.

In this analysis, the 100 Worte tool for customer analysis has been used. The personality traits, in this case, are measured through the weight given to different psychological categories which together help to provide a picture of the individual’s personality as well as the type of message that the writer wants.
The analysis focuses on eight categories, reported and briefly explained in this table to
facilitate the interpretation of the results in the next paragraph. 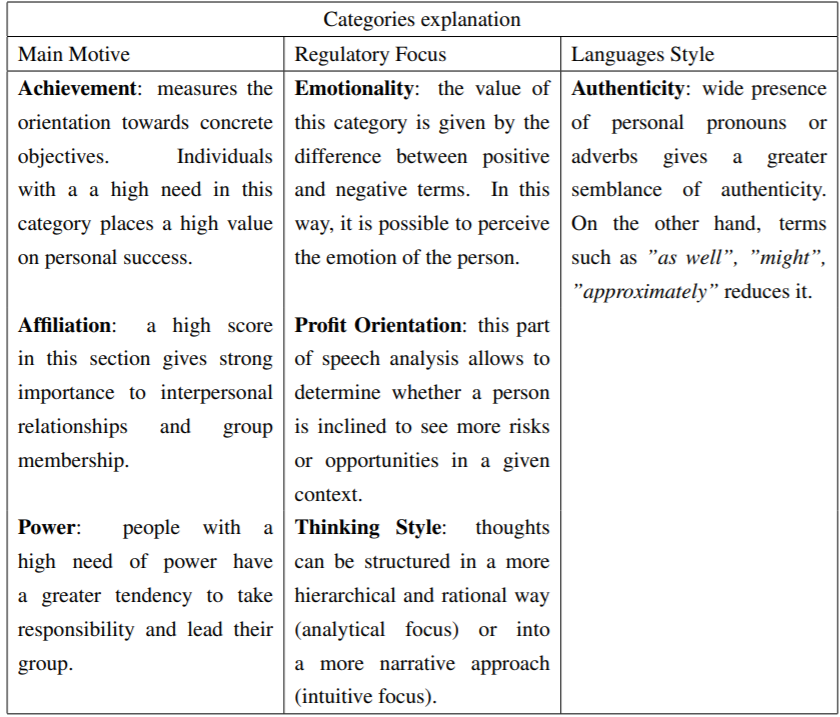 First, let’s analyze the results in aggregate form exposed in the density plot in Fig.1. This representation is very interesting because it allows to observe both the effective distribution of the different categories and the variation of the Corona-virus discourse from the rest of the sample. In Fig. 1 it is possible to observe the distribution of all the categories with their relative percentile and the Corona-virus speeches are highlighted. The first thing to underline is their relative position. In fact, for all the categories examined, these speeches have very similar values, in some cases, the overlap is almost perfect. This is particularly interesting because it shows how 2 all these speeches have strong elements of homogeneity. The effect is particularly strong in the case of the Power, Authenticity, Achieve, and Analytical categories. It is also possible to observe how in all cases the values of the observations are below average and often close to the last tenth percentile. This is particularly marked in the case of the categories Achieve, Positive and Reward. In fact, it is not difficult to imagine how in speeches in times of strong crisis, and great uncertainty there is a tendency to assume positions of greater aversion to risk and less positivity to show seriousness and respect for the situation. Even observing the events in their chronology, it is possible to see that in these cases the values are very low in the first speech (given in a moment of worst crisis) while in the following ones we can observe a tendency to return to normal. It can be concluded that the speeches in time of crisis actually have a particular characterization compared to the other speeches. 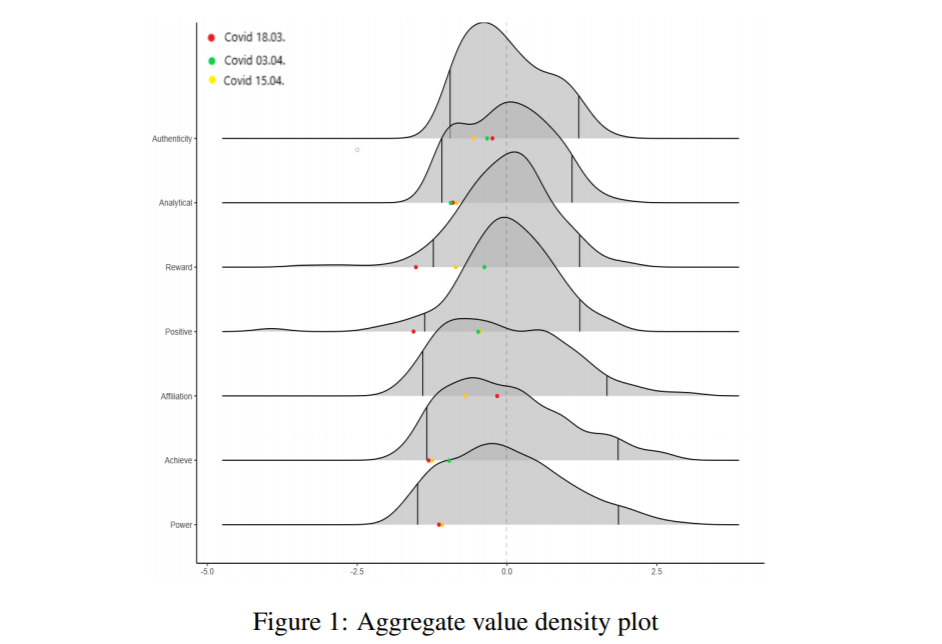 bserving instead the graph in a wider sense, it can be seen that the general distributions of the Reward and Positive categories are extremely narrowly concentrated on the average. This shows how Angela Merkel, in her speeches, seems to be particularly consistent in using certain expressions without any noteworthy variations. On the contrary, looking at the last 3 distributions, the curve is flatter and it has many marked tails, especially for high values. This means that these categories are much more influenced depending on the context or the type of audience. In conclusion, the Chancellor seems to be more consistent in using certain words in certain categories while letting the context guide her in other cases. Secondly, it is possible to observe how the speeches in Corona-virus time are clearly distinct from the usual Angela Merkel style, especially for the first speech she had on March 18th.

2.2 A glance into details

In this second part, the analysis will concentrate on the value of each category year by year to see, first of all, whether there is any detectable trend and secondly how the Corona-virus speeches taken in general are positioned. This test is very important because it allows to determine whether the Corona-virus speeches’ values are significantly different from the others and which degree. Surely one of the most relevant results is about Achieve which shows how the use of terms referring to this category is significantly reduced in the case of Corona-virus speech compared to all other years. The variation is in this case significant at 95%, which means that there has actually been a strong variation in the content of the speeches on this point. It is also interesting to note that there is a decreasing trend in the first years analyzed (2006-2009) and that this tends to stabilize in a second period. Another important result is given by the Positive terms in which it is possible to observe that this category with regard to the Corona-virus is clearly lower than the general trend and that the confidence interval around this value is extremely wider than that of Achieve. This is because the values concerning the first discourse under examination (the one of March 18th) are extremely lower than those of the other two discourses, reducing the average value and widening the range. Moreover, it can be observed that the values of this category, despite being more consistent over time, have a slight reduction in 2011 and 2015, two years of strong crisis within the EU. In fact, in the first case, we can see the management of the crisis in Greece, which brought Europe to the edge of the abyss, while 2015 was a year in which terrorist attacks in various European countries led to a security crisis within the individual states of the continent.

The values of the Reward category are also very interesting. In fact, this category seems to be particularly unstable over time without showing any particular trend. The values observed near the Corona-virus speeches are similar compared to those observed for the Positive category, and looking at the single data, the distribution is similar: very low value for March 18th (in fact the speech was held in the most critical phase) that tends to return to the rest of the average of the observations in the other two speeches.

Also in this case it is possible to observe distinctly a low value for the year 2011. On the other hand, as far as the Affiliation category is concerned, the results are very different compared to the previous ones. In fact, the values for the Corona-virus speeches are not only not significant, but in general, all the observations for each year show much wider intervals than the categories observed so far. This means that the use of terms that can be associated to this category while remaining stable over time varies a lot from speech to speech, probably influenced by context or audience. It is however interesting to note that in this case, the emergency context has not influenced the style of communication.

2.3 Relationship between categories and context

To conclude, this last section will show the relationship that exists between the categories and the particular context in which each speech is held.

In this section, the analysis will focus on entering into the contexts in which the speeches are held to investigate whether speeches given in front of different audiences and on different topics are intrinsically different. In this way, it may be possible to determine the actual importance of the results shown in Fig. 1. To observe the effect that individual speeches can have, a tsne has been implemented. This technique applied to datasets with many variables serves to reduce the dimensionality and observe how the variables are distributed within the detected groups. Therefore, it is possible to see how the speeches about the emergency of the Corona-virus are intrinsically different from the others, but it is unknown in what extent this is the simple result of the fact that the context is different. Fig. 4 shows the division into homogeneous clusters of all Merkel’s speeches under analysis, and the observations are identified with different colors depending on the context. If the style of the speeches depended on the context, we would have clusters of homogeneous colors. However, in Fig. 4 we can see that in most of the clusters there is a strong heterogeneity of contexts. The only elements of stability are highlighted in the relative circles. 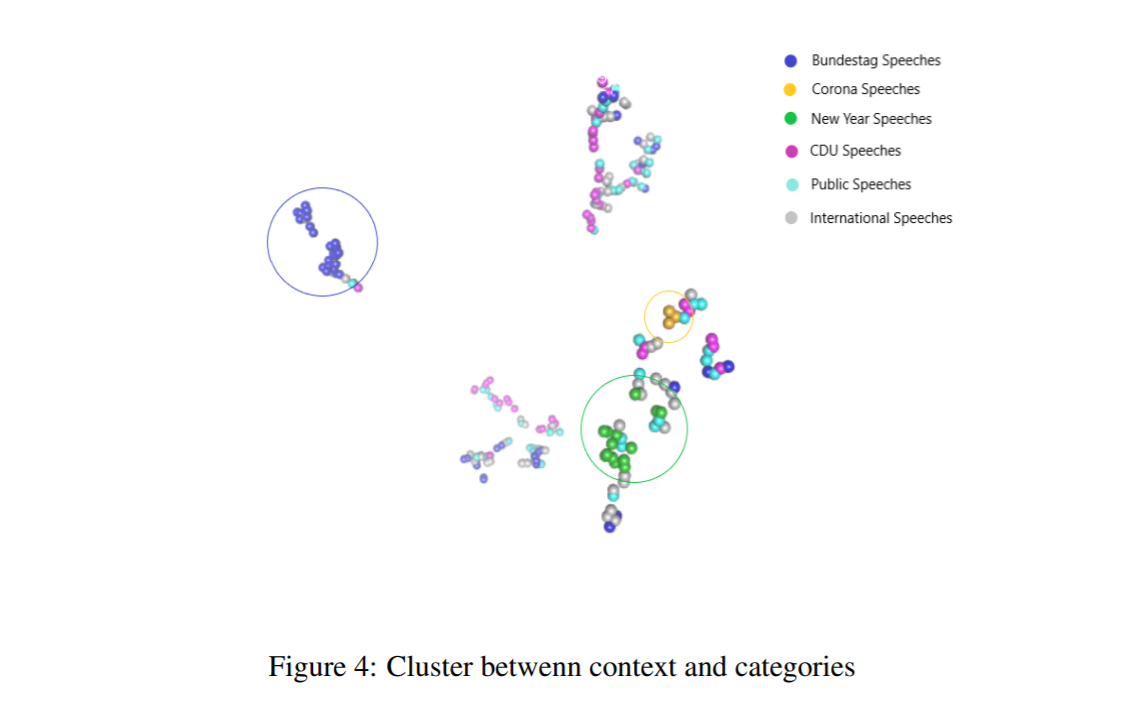 First of all, we can see how the speeches of the Corona-virus are strongly linked to each
other and appear extremely close together. Two other things that can be observed are the New Year’s Eve speeches (in green) and, even though to a smaller extent, the speeches in front of the German parliament (in blue). The homogeneity in this last context can be explained by the fact that in that particular framework, Angela Merkel is addressing a very homogeneous audience that requires more technical ways of expression. New Year’s Eve speeches can also be considered more homogeneous given the particular context that requires more neutral modes of expression. From this result, however, it is possible to have confirmation that the speeches in time of this crisis not only have very marked values for each category (as seen in Fig.1) but that this distinction does not recur for all types of speech. It seems therefore clear how the speeches related to the Corona-virus are distinguished from the others.

Two conclusions can be drawn from this data. First, that Angela Merkel is quite consistent in her stylistic choices. Whether this element is due to her character expression or the result of a strategic choice, it is interesting to note that a person can easily be characterized by the analysis of her speech. Secondly, even a person known for his stability as Merkel has been influenced in her communication by a crisis context.

- What is Important in a Crisis?First Relationship, then Responsibility?