How job advertisements unconsciously distinguish between men and women - or how gender-specific language reinforces gender inequality.

In today's world, gender equality is increasingly demanded and influences the corporate culture. Gender bias is being exposed more and more often. For example, since 01.01.2019 the law of the third sex has become legally binding, which means that companies are now obliged to write their job advertisements in a gender-neutral way. The term "(m/f)" alone is therefore no longer sufficient. An "i" for inter-sexual or a "d" for diverse must be added. Otherwise, there is the possibility of a complaint of discrimination.

The existence of gender bias is nothing new nowadays, as women are demonstrably underrepresented in many professions. In 2017, for example, the proportion of women on German management boards was only seven percent (source: consulting firm EY). Only 23% of professorships at German colleges and universities were awarded to women in 2015 (source: Federal Statistical Office). Similarly, only 13% in the engineering professions are female (source: Federal Statistical Office).

How to detect the gender Bias?

To uncover this gender bias, Gaucher, Friesen and Kay investigated the frequency of male words such as "dominant" and "competitive" in job advertisements. They investigated whether these words have an influence on how many men and women apply for this job. In a further experiment 45 years ago, Bem and Bem found that language in job advertisements has a great influence, for example, a woman applies for a typical male job or not. The language was changed so that a female language was chosen in the job advertisement for a "male profession". The result? More women have actually applied for this job.

Gender Bias - about gender stereotypes and their influence on language

The difference between male and female language has been proven several times. Women tend to use more emotional language and talk about relationships more often than men. For example, this can be seen in the use of personal pronouns. For example, if the language of a job advertisement is very masculine, women subconsciously perceive that this profession is probably dominated by men. As a result, women apply much less frequently.

Gender Bias – The Study of Gaucher and Colleagues

In a study by Gaucher and colleagues, the researchers investigated different questions. First, they investigated whether gender-specific formulations exist in English job advertisements. To do this, they collected 4000 job advertisements on the Internet and selected ten professions. They sorted them according to the proportion of men and women. They then analysed the job advertisements using text analysis software to check for specific masculine and feminine words.

Gender Bias - The experiment by 100W

The findings of Gaucher and colleagues made us curious. We wanted to know whether gender bias is also to be found in job advertisements in the German job market.

In contrast to Gaucher's attempt, we collected 32,000 job advertisements from online job posts. However, we had to expand our text analysis core with two dictionaries for the masculine and feminine words.

In their study, Gaucher's researchers did not examine structural functional words, but rather content words, which is why we first searched for words that - according to the definition of Gaucher et al - stood for masculinity and femininity. Equipped with 32,000 job advertisements for a wide variety of professions and the two dictionaries, we now needed software to process the advertisements.

Tracking down the gender bias in German job advertisements - our approach

Here the 100W text analysis was used. It made it possible to examine the job advertisements for gender-specific wording, but also for other psychological characteristics. In our study on predicting motives, we have explained in detail how our analysis works exactly.

To compare the gender distribution in the individual occupations, we drew on data from the Federal Statistical Office.

Occupations with a particularly high proportion of men are:

On the other hand, occupations with a high proportion of women are:

In addition to the approach of Gaucher et al. we collected implicit motives - i.e. motives that guide human thinking and control action. They are of central importance in social psychology.

The Gender bias in German job advertisements - Our assumptions

We examined the language differences for occupations with a high proportion of a particular gender, which were clustered in the figure below.

Language differences in occupations with a high proportion of one sex 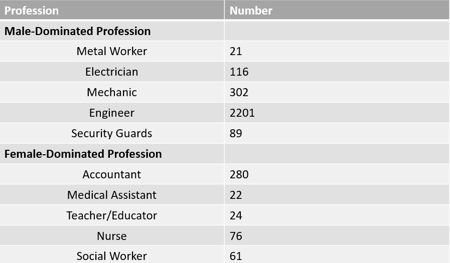 The following figures show the frequency of masculine and feminine language in the two clusters of male and female dominated professions. Figure 1 shows 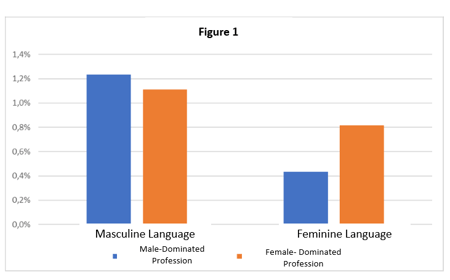 Job advertisements in male-dominated professions contain more masculine words than job advertisements in female-dominated professions. The same is true - even to a greater extent but in the opposite direction - for women-dominated occupations. With these findings we confirm Gaucher et al. because they showed the same difference. However, Gaucher et al. did not make our second observation - the unequal distribution of feminine language.

In a second step, we examined job advertisements for motives. Here we found differences for the relationship motive and the performance motive. While the performance motive was addressed much more frequently in male-dominated occupations, a relationship motive was more frequently expressed in female-dominated occupations. The power motive did not differ in the occupations mentioned (see Figure 2). 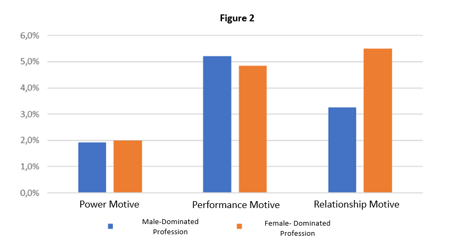 Summary of the results

The aim of the study was to investigate whether discriminatory gender differences on the linguistic level exist in German job advertisements. The final result was to reveal gender bias, if it exists. After an overall consideration of the results, we conclude that structural inequalities in the language of job advertisements exist that maintain and reinforce existing gender differences.

Gender bias - Equal opportunities for all!

That our tool, Augmented Writing, can guarantee a gender-neutral language, we have already written in detail in a blog post. It is therefore very worth taking a look.

As a result of our results, the relevance of using a gender-neutral language when addressing future employees is obvious. According to their affiliation, men and women are primarily interested in job advertisements that are formulated in their gender language. This is how they experience fit and affiliation. 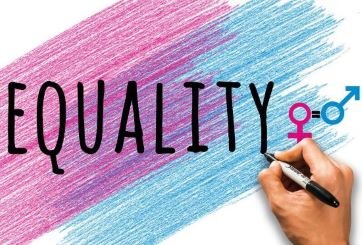 This highlights the strong (and also harmful) influence of gender-specific wording. In the study by Gaucher et al., the test participants could not consciously perceive unequal gender language because they gave other reasons for their assessment of attractiveness. However, this in turn leads women to attribute their "disinterest" in certain occupations to external reasons such as requirements or skills. Consequently, occupations are therefore out of the question, although they would be suitable in principle.

Example of some gender-specific words